I think we have plenty of time to get involved, because the Federal Reserve is nowhere near reversing its monetary policy.

Ethereum is had a bad go of things since the “Merge.” Looking at the chart, I think it’s kind of obvious that the market is trying to bounce from the lows, but ultimately, I think there is only a matter of time before the sellers come back into the market. The 50-Day EMA is an indicator that a lot of people pay attention to and is sitting at the crucial $1600 psychological support level.

Even if we were to break above there, there is also plenty of resistance or the $1800 level, and most certainly near the $2000 level where the 200-Day EMA sets. It’s until we break the role that that we are technically back in an uptrend, and I don’t think that’s going to be the case anytime soon. If the Federal Reserve is relatively tight with monetary policy, it’s difficult to imagine the traders are going to be willing to step out into the wrist spectrum and buy crypto overall. Yes, we will probably get a bit of a bounce, but I think this is more technical in nature than anything else.

But I think it is probably only a matter of time before we get a longer-term “buy-and-hold” situation, but I suspect it might be closer to the $400 level. At that point, I will more than likely start to build up a position, but right now I don’t feel any reason to get involved in this market for a bigger move. I think we have plenty of time to get involved, because the Federal Reserve is nowhere near reversing its monetary policy. I know that crypto believers think that they are outside of the financial system, but this last year has shown just how wrong that idea is. 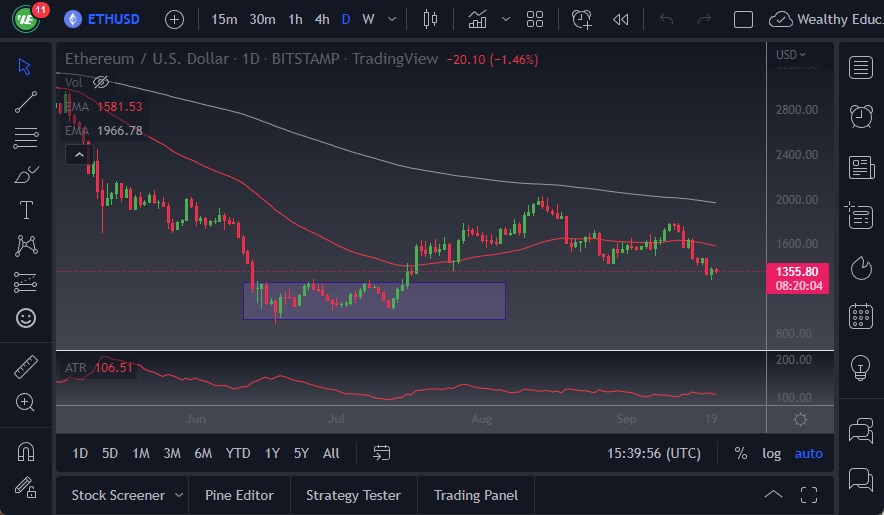 Ready to trade our ETH/USD trading forecast online? We’ve made a list of the best Forex crypto brokers worth trading with.